What is Common Threads?

We provide workshops, concerts, booklets and conferences that connect people of all ages and emphasize the leadership of young people. We share creative expression, and care about changing all the interlocking spokes in the wheel of oppression.

Here you can learn about the new Respect for Girls Project, listen to a concert by performers from three countries, download two free booklets on sexism and ageism, and read about programs from previous years. Traprock has made a commitment for feminism to infuse our projects, and since 2013 Common Threads has helped carry this out.

Traprock’s Long Line for Racial Justice program teamed up with youth in the West African nation of Sierra Leone. Together they created the Respect for Girls Project, to address sexual harassment and promote female leadership and empowerment. Girls are the future leaders of tomorrow.

The Long Line Racial Justice Concert begins with Jonel Beauvais of the Mohawk Nation reading her “Blessing Poem” and griot Vanessa Johnson calling in the ancestors.

* Theme songs on Respect for Girls from Sierra Leone.

Traprock’s Sarah Pirtle organized this concert for the first day of spring 2021 to honor the work of United Against Hate and the UN International Day for the Elimination of Racial Justice.

How Respect for Girls Began

Long Line of Women Leaders for Racial Justice began after Common Threads director Sarah Pirtle brought Western MA teens ages 14 to 18 together in solidarity with the Black Lives Matter movement. Since July 2020, when a devoted core of young women in Franklin, Hampshire and Hampden counties formed, the group has met online weekly. Long Line began by hearing from guest speakers, examining racism, having supportive conversations and widening knowledge of Black, indigenous and people of color (BiPoc) women leaders in history. As Long Line members said when receiving Young Peacemaker Awards in May, 2021: it grew to “feel like a family of support.”

After the two youth groups decided to join together, they created the name of the Respect for Girls Project. To extend the work, Sarah Pirtle reached out to Vanessa Johnson, who directs a third teen leaders’ group from Syracuse, NY called the Gage Ambassador program.

The Gage program is inspired by the work of suffragist Matilda Joslyn Gage, described by Gloria Steinem as “the woman who was ahead of the women who were ahead of their time.” Members of the Gage group, for instance, created a Youth Declaration of Sentiments to update the Declaration of Sentiments which was the 1848 Seneca Falls Convention’s manifesto.

Today the three groups collaborate on skits, songs, and dialogue methods that can be used in any region. Google “Respect For Girls” to see the combined website. Please contact us to provide programs for classrooms and community groups.

Common Threads director Sarah Pirtle wrote two booklets to promote conversations on ageism and on sexism.  We are grateful to the Markam-Nathan Foundation for Social Justice for making possible the writing, printing and free distribution of both of these booklets.

▤ KEEPERS OF THE FIRE: Dialogue to Change Sexism and Foster Gender Reconciliation can be downloaded here.

Written at the time of the 2017 Women’s March, this booklet provides dialogue questions, anecdotes, and insights. In addition, information about the organizations that address gender justice are provided.

▤ PASSING THE POWER ON: Dialogue to Connect Ages and Change Ageism can be downloaded here. These methods help recognize and change ageism in progressive community settings.

Why we bring ageism into intersectional understanding:

“Age is a road in the intersection of oppressions that is often not talked about and acknowledged but, like every other oppression, it contributes to holding all the others in place. We can feel more alone if other people aren’t facing it, so we want to have these conversations more directly.”

Past Work of Common Threads

Traprock collaborates to promote teen Interfaith dialogue with the Islamic Society of West Springfield since 2017. This series was initiated with Tahirah Amatul-Wadud, Muslim lawyer from West Springfield who specializes in civil rights and domestic relations law. She was a White House invitee December 2015 attending a ceremony entitled, Celebrating and Protecting America’s Tradition of Religious Pluralism where the community program ‘Know Your Neighbor’ was launched.

Zainab Ahmed is studying for the bar exam.

Elaf El Wohaibi of UConn is a graduate of Madina Academy

Messages from the Girls Empowerment Panel

Trust yourself and take a stand.

We believe that in solidarity we can find ways to respect all genders and also acknowledge and address sexism.

“Here are just a few reasons why we all need feminism:

From “What About Feminism?” in New Moon Magazine for Girls, February 2016

What Kind of Dialogue?

This is the type of conversation we foster. Email to learn about specific programs for schools.
We create a conversation setting with respect for everyone.

ARCHIVE of the Common Threads Conference and Speaker Series

From across the generations, we came together and claimed ourselves as part of the long line of people who want to be part of social change. We heard slam poetry by Jasmin Roberts and Arjuna Greist. We met in small multi-age conversations, attended workshops, and spoke about hopes for the future and our work for social change.

Comments about the conference:

“I found the multi-generational aspect extremely valuable. To share ideas and stories and issues amongst all ages was truly special.”

“I was struck by the truth-telling of Jasmin’s poetry especially regarding racism….I like the topic of feminism and supporting women.”

“I liked the music, thought-provoking questions, poetry and the Roots Groups for grounding. I wanted it longer than one day.”

From Feminism is for Everybody, p. 1 by bell hooks

“Simply put feminism is a movement to end sexism…. It is a definition which implies that all sexist thinking and action is the problem, whether those who perpetuate it are female or male, child or adult. It is also broad enough to include an understanding of systemic institutionalized sexism.”

When Traprock Peace Educator Coordinator Sarah Pirtle started Common Threads in 2013 she organized monthly gatherings led by women of color who used the arts to promote social justice through drama, spoken word, or martial arts combined with poetry. Participants included all ages. Initially the project was named Peace Net for Girls and Women, and then was changed to the more inclusive name of Common Threads.

Monthly gatherings six months of the year help this active network develop strong connections between girls and women. The monthly gatherings feature a presenter who is a woman of color and who uses the arts to promote social justice. Gatherings also feature the voices of young women ages 12–17 through spoken word, songwriting, or martial arts combined with poetry. 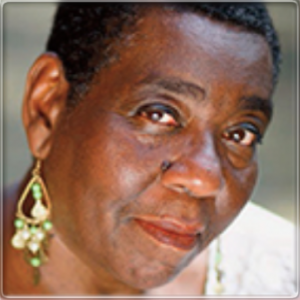 The monthly series began October 2013 with a presentation by Ingrid Askew, director of Crossing the Waters. Ingrid lived for ten years in post apartheid South Africa where she still resides part-time working with local artists and activists creating cultural exchange programs that focus on social justice, and cultural sharing. Askew directed the Interfaith Pilgrimage of the Middle Passage which was featured in the award winning PBS documentary This Far by Faith: African Americans Spiritual Journeys. Ingrid is on the Peace Net Board.

María Luisa Arroyo, a 2014 presenter pictured above, is the author of Gathering Words: Recogiendo Palabras. She is an award-winning multilingual Puerto Rican poet and educator. Her poems have been published in many journals, including in the anthology, Women Write Resistance: Poets Resist Gender Violence. María Luisa has performed widely, including in Chicago, DC, and Puerto Rico

The “Voices Rising Series” runs from October to December and from February through April. We travel to a different location each time so that people in the widespread geography can find a gathering near them.

Each year one of the six gatherings is a song swap of songs by and about women and girls. Another is a four-hour event called “Girls Voices Rising” for girls to speak on issues of gender violence and ask anonymous questions and receive mentoring by women.

“At each Peace Net meeting, I feel the momentum growing. Connections keep increasing, and people are eager to meet again and bring their friends.”
“We were hungry for an experience like this.”
“Nothing moves me so deeply as people speaking their truths like happened here.”
“So many wonderful heart opening experiences in a short period of time. Fantastic energy in the room that keep building during our time together.”
“My ten year old daughter arrived very tired due to a big day at school, but she loved her time — the performances of songs and poems by the young women, Janet Aalf’s movement pieces and was very interested in what Ingrid Askew had to say which led to a really good discussion.”
“All of you created an atmosphere where everyone felt welcome.”

These presentations are available for schools and community groups.

The first booklet in the Conversation Starter series has been published.

Peace Net provides facilitation for community groups and houses of worship to discuss how to change and respond to the widespread problem of interpersonal violence against women.

I was not put on this earth to be invisible.

I was not born to be denied.

I was not given life only to belong to someone else.

I belong to me.

I have a voice and I will use it.

I have dreams unforgettable.

I have a name and it is not anonymous or insignificant or unworthy or waiting any more to be called.

Some day they will say this is the moment when the world got out of my way.

This is the moment I was allowed to be astonishing.

This is the moment when my rising no longer scares you.

This is the moment when being a girl became my strength and not my pain.

This is the moment that the world sees that although I am held back by every problem, I am the key.

I am the key to all solutions.

This is my moment

Imagine a girl who believes that it is right and good she is a girl,
A girl who feels comfortable in her own skin.

Imagine a girl who writes her own lyrics, but opens her ears to other’s music,
A girl who speaks her true voice.

Imagine a girl who takes risks and pushes her limits,
A girl who isn’t afraid to conquer her fears.

Imagine a girl who sees all points of the spectrum
Even if she disagrees.

Imagine a girl who meets conflict with compassion,
A girl with the ability to forgive others.

Imagine a girl who changes how she’s treated other girls
Because she feels safe enough to change.

Imagine a girl who recognizes potential within herself and others,
Who follows her passions to find her gifts.

Imagine a girl who feels connected to the strong line of women
who have come before, a girl who knows her heritage.

Imagine a girl who runs into the future with an open mind,
Who isn’t afraid of its bitter-sweetness.

Imagine a girl who loves the whole thing of life,
Who doesn’t look for perfection. A girl who embraces all that life has to offer.

Imagine yourself as this girl.