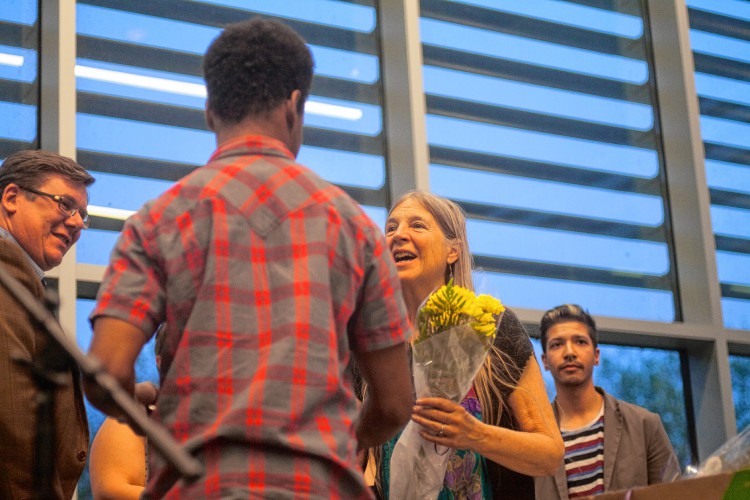 GREENFIELD — “One thing we all need, is peace,” said Marcia Miller, co-chair of the Peacemaker Awards, speaking in front of about 200 people Thursday evening at Greenfield Community College during the 16th annual awards presentation.

The Peacemaker Awards recognize Franklin County students grades eight through 12 who have worked toward peace in their schools, churches and communities. Past recipients of the award include young people addressing issues of social injustice and global inequality, in specific areas such as racism, homophobia and women’s rights.

“I don’t do it to be recognized,” said Teiray Moore, a Peacemaker nominee from The Brick House Community Resource Center; “It’s about me giving … a voice (to those) who can’t speak.”

Moore was recognized for his work combating racism. He has hosted a few film screenings about racial justice and participated in marches, discussions and presentations.

“He shows up,” said Dana Mengwasser. “Tieray has an enormous heart, and he cares a lot. When he’s talking about things he cares about,” she said, “you listen.”

Each recipient was introduced by the person who nominated the student, and also given the opportunity to speak.

“It makes me feel really awesome to help people. Just a small way to give back,” said Ashley Walker, a recipient from Mohawk Trail Regional High School, who, along with Lauren Davenport, received the award for volunteering at the West County Community Meal Program.

The recognition ceremony also included performances by students. Clara Witty, who was awarded for her work in ecology and food justice, played the guitar and sang with fellow Ralph C. Mahar Regional School student Kiersten Samalis.

“Our community is forever in your debt,” said Academy at Charlemont Dean of Students Nora Bates Zale about Amelia Chalfant, Sophia Corwin and Leni Sperry-Fromm, who started a Gender and Sexuality Alliance in their school. The chorus group 5 of Noon, who are also from Academy at Charlemont, performed “Imagine,” by John Lennon.

Dubay is a 10th-grader at Four Rivers School and a youth leader at Unity in the Pioneer Valley in Greenfield. He was recognized for his work advocating for the LGBT community, and just being an all-around good person.

He composes healing music for his YouTube channel, signed up for Adopt-A-Family, bought gifts for a single mother and her two sons, and also gave a presentation at the University of Connecticut on gender and identity.

The original article appeared at The Recorder, Thursday, May 12, 2016