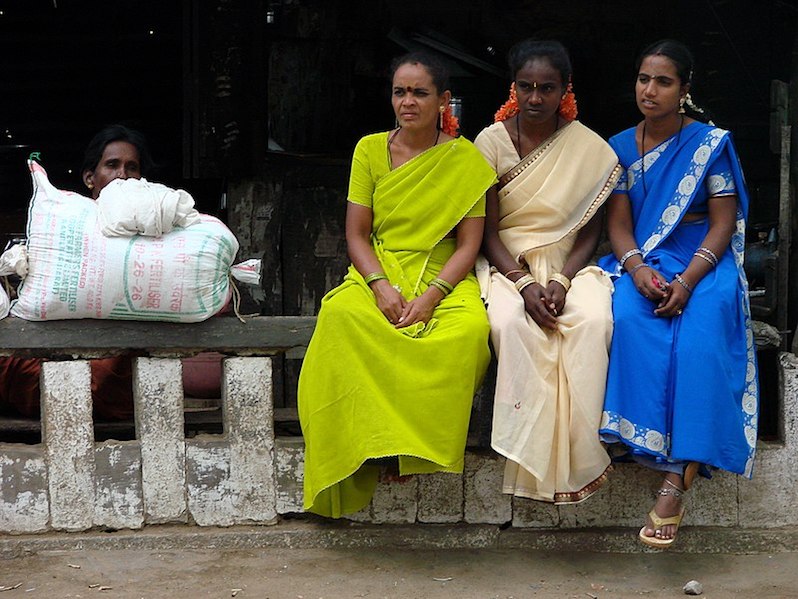 I am looking at the faces of 10-year-old girls from across the world—faces brimming with expectancy. The U.N. report, “The State of World Population 2016,” opens with their photos, and these words are part of the introduction to Chapter 4, “The Face of the Future”:

With support from family, community and nation, and the full realization of her rights, a 10-year-old girl can thrive and help bring about the future we all want.

What the world will look like in 15 years will depend on our doing everything in our power to ignite the potential of the 10-year-old girl today.

What the world will look like in 15 years depends also on our commitment to reduce substantially greenhouse gas emissions and achieve 50 percent of energy from renewable sources by 2030, so that her world remains habitable.

However, we cannot get to a sustainable world without the full realization of girls’ and women’s rights, for women are responsible for providing food, fuel and water for billions of people in much of Africa and Asia, where natural resources are growing scarce or rapidly degrading. Yet many of these women lack the right to own land or to access credit and technical training to assure the sustainability of their countries’ natural resources.

We will not get there in 15 years without women’s equality in decision-making because women in governance positions sign on to international treaties that take action against climate change more than their male counterparts. Further, there is abundant evidence that women care more about the environment than men and handle risk—economic, environmental and personal—more wisely than men.

• Climate is changing 170 times faster due to human activity than through natural forces.

• Within 40 years, up to 1.5 billion people could be climate change migrants and refugees from rising seas.

Worsening drought, deforestation and desertification mean that women in developing countries must walk farther distances for fuel and water with higher risk of sexual violence, carry heavier loads and work harder to grow enough food for their families. In one rural Sudanese community the time required to gather fuelwood has quadrupled over a decade. Heavier loads over longer distances cause spinal damage, pregnancy complications and higher maternal mortality. Girls drop out of school more often than boys to assist their mothers, setting them up for less education and greater poverty than their brothers. Moreover, in times of crop scarcity women will give food priority to their husbands and sons.

In the early 1990s in Zimbabwe, solar cookers, a renewable technology that preserves carbon-sequestering biomass and frees women from firewood collection so they may engage in income-earning activities, were introduced. The project failed because men opposed women learning a technology that the men knew nothing about. Thus the mantra: No climate justice without justice for women.

Embedded within climate science and the study of those most vulnerable to climate change and natural disasters is a rarely acknowledged fact, namely, that women and girls are the primary victims. The extent of this injustice and its roots lie in women’s inequality. A multitude of discriminatory economic, cultural and social factors converge to worsen climate change repercussions for women. Among these are greater female poverty, fewer resources and less power in their society, physical limits imposed on women and girls and increased sexual violence during and after climate-related disasters. All contribute to women’s greater mortality, destitution and sexual victimization during extreme climate events.

Though not a climate-related natural disaster, the 2004 Asian tsunami, which killed more than 220,000 people in 12 countries, caused a high number of deaths among women and girls; and it serves to shed light on social inequalities that undermine women’s survival from climate-change disasters.

During the tsunami some women drowned, weighed down by their saris; others drowned because they had never been taught to swim—or to climb trees, as had their brothers. Many women died because they stayed behind to look for their children and other relatives. In one known case, a father struggling to hold his son and daughter from drowning, let go of his daughter’s hand—because his son was more important, given he would carry on the family line.

Yet women’s vulnerability in disasters rarely recedes with the floodwaters. Male violence against women increases with the chaos of natural and climate-related disasters, just as it does with social breakdown in war and conflict.

The Philippines, one of the countries most vulnerable to climate change and an epicenter of super typhoons, is a magnet for sex traffickers who prey on homeless victims after disasters. In the wake Typhoon Haiyan, the strongest typhoon ever recorded at the time (2013), an underground economy sprang up in the Tacloban Astrodome where thousands of displaced Filipinos sought shelter. Girls and women were sold into prostitution for food and aid supplies. Others were offered jobs and scholarships but then trafficked to the red light district of Angeles City, a legacy of the former U.S. Clark Air Force Base, which operated for a nearly a century. Nearly 80 percent of women and girls exploited in sex clubs and bars in Angeles City are from climate-change vulnerable areas. Climate change—a boon for traffickers, pimps and johns—victimizes women and girls doubly, with the loss of home and livelihood and the heightened risk of sexual exploitation.

More than a quarter of African-American women in New Orleans were living in poverty (vs. 20 percent of men) when Hurricane Katrina struck the Gulf Coast of the United States in August 2005 with winds up to 140 miles per hour and storm surges that broke through barrier levees. Few had cars and, those who could escape were stranded around the city at heightened risk of sexual assault. Further, pregnancy and recent childbirth limited the mobility of some.

By 2008, the number of black single mothers living in poverty had declined precipitously in New Orleans. They were displaced by a government decision to raze public housing and were replaced by higher-income whites as gentrification overran the city. They became climate migrants scattered across southern states. No studies have determined their fate.

“Thems that got will get, and thems that’s not will lose,” wrote Fatima Shalk of New Orleans, summing up the winners and losers of Katrina and the fate of the U.S. poor in future climate change disasters.

In neighboring storm-battered Mississippi, violence against women increased fourfold in the year after Hurricane Katrina. Two years later, the rate was more than double.

Gender only formally entered U.N. deliberations on climate change in 2008, more than two decades after climate studies and conferences were launched by the organization. Subsequent studies and women’s testimonies have exposed the layers of climate impacts on women, worsened by gender-based inequality in their societies; and they also provide compelling evidence to invest in women as agents of land, water and forest restoration.

In the 1970s, Nobel Peace Prize laureate Wangari Maathai, the first East African woman to receive a Ph.D., set off a revolution to rejuvenate the deforested and desertifying environment of Kenya, her home country. Partnering with women’s groups, she initiated community-based tree-planting efforts, in what became the Greenbelt Movement and which spread to dozens of other countries. Forty years later, more than 40 million trees had transformed landscapes, as well as the lives and minds of the women with whom Maathai worked.

The skills, knowledge and income they gained, as she testified, brought self-confidence and independence. Given women’s relationship to forests in developing countries, it is no surprise that a study of deforestation in 61 countries between 1990 and 2005 found that countries with numerous and large women’s and environmental nongovernmental organizations had significantly lower levels of forest loss.

Agriculture contributes at least a quarter of India’s greenhouse gas emissions, nitrous oxide from fertilizers being one of the sources. More than 5,000 women in 75 villages of the arid interior of Andra Pradesh offer an exemplary mitigating alternative. Working with women’s village associations called Sanghams, the Deccan Development Society has facilitated their transition to income-generating organic agriculture using indigenous crops that need less water, as well as restoring medicinal plants and reclaiming degraded land by planting neighborhood forests (more than 1 million trees) over 25 years. Their companion accomplishments include a seed bank and a loan system for women farmers, a community radio station that reaches 200 villages and production of videos on methods of organic agriculture, seed saving and the hazards of genetically engineering in agriculture.

Most are Dalits (the broken), the poorest of the poor in India’s rigid caste system. The story of one, Chinna Narsamma, the Radio Jockey, mirrors the transformation of both their environment and themselves achieved by these many thousands of heretofore-impoverished castaways of society. Narsamma, who never had any formal education, now “womans” a radio station, produces films, speaks in-country and abroad about the Andra Pradesh model, and also cultivates her own 20 acres of organic agriculture. In a region challenged with barren land, semi-arid conditions and frequent droughts, women farmers have been able to banish hunger and provide an exemplary model of climate justice with justice for women.

“The best projects tackle environmental problems while markedly improving the lives of women and girls.” —Monique Barbut, Executive Secretary of the U.N. Convention to Combat Desertification

The following recommendations, gleaned from pilot projects and successful programs, are the tip of the iceberg regarding the potential for women’s contributions to mitigating and adapting to climate change, as well as to their own, simultaneous, liberation.

• Include women in local and regional decision-making councils and increase women’s leadership in delegations to U.N. climate accord conferences.

All these prescriptions and many more presume that empowering women—through access to credit and technical training, through land ownership and equal economic and political decision-making roles—is key to mitigating and adapting to climate change in both developing and developed countries.

Correspondingly, all of these recommendations—if they are to materialize—oblige men to share power with women and to commit to eliminating social, legal and cultural discrimination against women as well as all forms of violence against women. In other words—a sea change in the patriarchal order of things.

The World Bank recently reported that of 173 economies studied, nine in 10 had at least one law impeding women’s economic empowerment, including access to credit. In the allegedly democratic United States, a meager 19 percent of U.S. representatives are women, and a majority of U.S. men polled recently do not want a female president in their lifetimes. As for the ten major U.S. environmental NGOs, 80 percent are run by white men, though polls suggest that women, Native Americans, Latinos, African-Americans and Asians care more and are more seriously affected by climate change.

If today’s 10-year-old girls are to thrive and help bring about a future we all want, men need to cede their grip on power and women need to take power as partners in the project of transforming the governing paradigms of power. Otherwise, we are all doomed to armageddons of climate change, nuclear weapons, war without end, extremes of inequality and every form of sexualized and racialized violence.