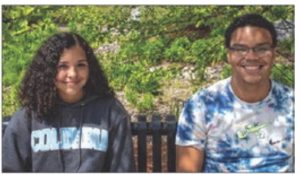 Greenfield High School students Aneesa Brewer and Deion Brewington-Simon were recognized at the 21st annual Peacemaker Awards for their involvement in Stand Up, a weekly social and support group for students of color. STAFF PHOTO/CHRIS LARABEE

Twelve Franklin County students and two student groups have been recognized for their efforts in making a difference in the community through activism and outreach. The 21st annual Peacemaker Awards, held virtually on Zoom, were presented to eighth- through 12th-grade students for their positive involvement in the community over the past year. The awards are sponsored by the Interfaith Council of Franklin County and the Traprock Center for Peace and Justice.

“This year, I want to recognize you not only as peacemakers, but as change-makers,” Blais said. “You took the initiative to act, to make change. And the fact that you did this during a global pandemic makes it even more extraordinary.” The students were nominated by teachers or community members. When they were presented their awards, students were asked what they did for the community and what inspired them to get involved with volunteer work or activism.

Vivienne Potee, a studentleader of Pioneer Valley Regional School’s Training Active Bystanders group, said she was inspired by her grandfather, who was “a doctor and a pacifist.”

“Peace isn’t about refusing to fight,” Potee said. “It’s about healing the wounds caused by fighting.”

Potee was nominated by Linda Chapin of the Northfield Food Pantry for her volunteer efforts throughout the spring and summer.

Another student, Carlie Mackenzie Kempf of Four Rivers Charter Public School in Greenfield, was nominated for her work over the summer raising $8,000 for Black Lives Matter groups by selling Tshirts featuring her artwork.

She said she always had an interest in activism, but the death of George Floyd inspired her to get more involved. Kempf found that her involvement made a positive impact on herself and the community.

“I’ve always been interested in activism as a whole, but specifically over the summer, the death of George Floyd, … as a young Black woman, it inspired me,” Kempf said. “(Activism) could make me feel good about myself and help other people.”

Jyn Rankin, who is homeschooled, said she is inspired by individuals such as Harriet Tubman and that the battle for equality can be waged in everyday life. “I always grew up with a sense that you can fight bad things happening in the world,” Rankin said. “It d o e s n’t have to be a whole big thing like in a movie; it can be a conversation.”

The ceremony ended with closing statements from the Interfaith Council of Franklin County’s Rev. Susan Bowman, who quoted “it starts within, with one individual who seeks the peace,” from late Congressman John Lewis’ book “Across That Bridge.”

To close the ceremony, Bowman adopted Lewis’ quote as a call to action.

“It starts with one individual who seeks the way of peace,” Bowman said. “Will you be that person?”

The two student groups recognized were Training Active Bystanders, which teaches an anti-bullying curriculum to seventh-grade students, and Stand Up, a weekly social and support group for youth of color ages 14 to 21.